Now reading: What exactly is a BROCADE WEAVE?
Share
Prev

What exactly is a BROCADE WEAVE?

Brocade arguably is the most widely used term in the world of weaving. However, it is often misunderstood by many.

Let us explore what does one mean when he/ she refers to a Brocade Saree, or fabric, in terms of the weaving technique, and its usage in the context of Indian handloom weaving.

Technically, any jacquard shuttle weaving that uses a supplementary or extra weft technique can be termed as a Brocade weave. As you can imagine, any fabric is woven by the interplay of the warp (the threads that run through its length), and the weft (the threads that run through its width). In a brocade weave, in addition to the primary weft that holds the warp threads together to weaves the ground, as extra weft is thrown by the weaver that only weaves the motifs and is independent of the ground. That is to say, if we carefully remove these extra-weft threads from the fabric, the ground will still be intact while the motifs will be removed. (Do not try this at home. :))

This is in contrast with a Jamawar or Tanchoi weave where the design or motifs are created using the primary weft threads itself and are inseparable from the ground.

In the Fekuan brocade, the extra width runs end-to-end weaving motifs across the width of the fabric. If the motifs cover only a small area on the fabric, there are often floating extra weft on the back which are then diligently and carefully clipped off. This is often referred to as Cutwork or Katruan (कतरुआं).

In the Kadhuan Brocade, the extra weft does not run across the width. On the contrary, the master weaver weaves each motif individually, along with the cloth. There are no cuts at the back as there are no floating extra weft. This makes the motifs sharper, provides more creative latitude with respect to the number of colors that can be used in motifs, and also makes the fabric more comfortable to the skin due to absence of cuts. We will take up this exclusive art of Kadhuan Brocade in more detail in another blog post. For now, suffice it to say the Kadhuan Brocade is the epitome of handloom brocade weaving in India and is very time intensive.

With advancements in technology, a lot of brocades today are being woven on powerlooms. We do not see any harm in it per se. A saree or fabric may not be inferior just because it is woven on a machine. Machine weaving helps to contain the costs significantly and that is a good thing for the end-user so long as the quality is not compromised. We also believe that if something can be easily replicated on a powerloom, has no use being put through the limited and high cost alternative of handlooms. What is important, though, is that a machine-made saree is not mis-represented as being a handwoven one. Unfortunately, that is not always the case. Powerloom impostors posing as handwoven sarees are ubiquitous. So beware.

Notwithstanding the above, Brocade has historically been the bastion of handloom weaving. Even today, the most exclusive Brocades are invariably woven on handlooms. Infact, the Kadhuan brocade, by definition, can only be woven on a handloom, taking up anywhere between eighty to a thousand man-hours to weave one saree of six yards.

The role of Zari

The term Brocade, almost always conjures up images of a rich Bridal saree with a generous use of Zari all over the body, the border and the pallu. Technically, that need not be the case. A weave can be called a brocade even if simple cotton or silk threads are used to create the motifs. But, wouldn’t that take the fun away? It has become an accepted practice to only refer to a weave with zari motifs as a true brocade. And we respect that. The zari, however, can vary in quality significantly. (More on zari and metallic threads in another post.)

We like to see brocade as a technique of weaving independent from the fabric, with the exception of use of zari. So a saree need not be a pure silk one to be called a brocade saree. It could as well be a Cotton Brocade, a Linen Brocade etc. It perfectly okay.

We have often seen people confusing Brocades with embroidery. Though Brocade fabrics are often embroidered upon, Brocade is a term exclusive to the art of weaving.

Do check out our exclusive collection of Banarasi and South Silk Brocades on HolyWeaves.com

We hope that we have managed to clear some doubts you might have had with respect to Brocade Weaving. Do post your comments to let us know what you think.

I am very fond of pure silk saree and my gut feeling is this is a genuine place to do online shopping.

It was fun reading your post. Quite informative. lots of doubt about Brocade weaving got cleared. Keep spreading your intense knowledge on weaves!

You need to post the Kadauan brocade story soon!

The collection are awesome …

I thank this group..for promoting handloom and Creation awareness of quality and quality rates of pure handloom silk..

I thank this group..for promoting handloom and Creation awareness of quality and quality rates of pure handloom silk..

Had a good read about brocade..would like to know more about linen silk too

Thank you for updating our knowledge on brocades! Looking forward for many more updates on weaving and fabric industry.

Thanks for sharing this information. I am deeply inspired by Indian weavers and their wonderful craft – be it brocade or ikkat or any such craft.
What is the difference between Banarasi weaving (like rocade) and Kanchipuram weaving ? In Kanchipuram weaving also wonderful motifs are created using extra weft.

Lovely shares lovely write up… Keep it up

Let customers speak for us

I like works of art that are traditional and come from an old grate tradition, I like them made of natural high quality materials, with refined designs, and I like them hand made. I’m very happy with what I bought, it has quality, tradition and beauty, you feel the soul in it.

We visited many weavers and saw their sarees but the passion in which the staff serviced us and the sarees were just exquisite. The pricing was also very good and their store was so clean and well kept. I think we went through all their sarees but that did not deter them from showing us more. A must visit when you go to Varanasi. The owner of the store was very pleasing and helpful.
Thank you looking forward to wearing the sarees in the near future.

C
HolyWeaves C.R. (Lucknow, IN)
The wonder of craftmanship

Beautiful sarees. Watching the weavers at work brought upon me the realisation of how precious our weaves are. The sarees are very correctly priced. Would come to Holy Weaves again without hesitation.

Second purchase from website. I purchased 3 mens Kurta sets. Sizes were true to you size chart. Quick delivery. Delivery costs could be lower, especially when combined with high cost of products. Would recommend Holyweaves and use again. 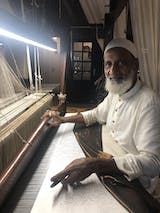 What a lovely warm scarf. Sent in a lovely box, fabulous

It's lovely. The saree,it's weave and feel is superb !

High quality stuff and packed with care. Thanks team for delivering these beautiful saris in time.

Not only the store has excellent collection but the staff is equally supportive. Our attendant Sunaina was very efficient n supportive.

U
HolyWeaves Upeksha
Beautiful as expected